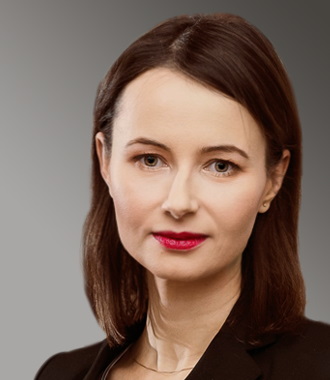 Ms Anna Dąbrowska-Hanas, an attorney-at-law, is a litigator with over fifteen years of experience in the Polish Competition Authority (known as “UOKiK”) and in private practice. Since 2003, she has been a member of the Warsaw Bar Association of Attorneys-at-Law and passed her bar exam with distinction.

For several years, Ms Dąbrowska-Hanas was a deputy director of the Competition Authority’s Legal Department and the Department of Protection of Collective Consumer Interests. Ms Dąbrowska-Hanas represented the President of the Office in court proceedings concerning a wide range of competition law and consumer law matters. In addition, she supervised numerous proceedings concerning practices infringing collective consumer interests by banks, insurance companies, real estate companies and by players within the e-commerce industry. In 2014 and 2015, she was involved in legislative works concerning a sweeping amendment to the Polish Competition Act.

Prior to joining UOKiK, Ms Dąbrowska-Hanas worked for over six years in a Warsaw law firm. During that time, she represented domestic and foreign clients who operated, among others in the FMCG and financial industries.

Most recently Ms Dąbrowska-Hanas collaborated on the preparation of a private damage action claim filed late 2019 by one of the largest mining companies in Poland. The claim seeks damages resulting from bid-rigging among suppliers of the company.

Ms Dąbrowska-Hanas has lectured and trained lawyers and businesspeople on competition and consumer protection law in Poland and abroad.